Killed in Action on D-Day

Thomas R. Dallas, Jr., was born on June 24, 1920. He was the son of Thomas and Mary Dallas of 433 Meriwether Street, Griffin. The 1940 census shows Dallas worked in textiles. He had four sisters and a brother.

Graduating from Griffin High School in 1938, Dallas was a member of the GHS Gold Wave Football Team. He was also active in the Boys Scouts of America.

Enlisting in 1939 in the local Spalding Grays, Dallas would later enter the U.S. Army-Air Corps. He served with the 116th Infantry.

Thomas R. Dallas, Jr. was killed in action, June 6, 1944, on the beaches of Normandy during D-Day. Originally buried in L’aurient, France, it was requested by his mother Mary, who now lived on Oak Street in Griffin, that a headstone be prepared and the remains moved to the Oak Hill Cemetery in 1948.

A service was held for 1st Lt. Dallas in the Pittman Chapel in Griffin. Rev. Zach C. Hayes, Jr. conducted the service. Pallbearers were well known citizens of Griffin. 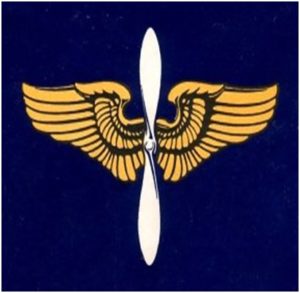 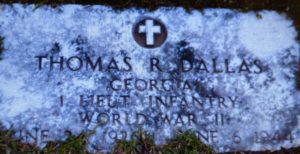