Killed in Action in Germany

Annon Irve Bozeman had Griffin connections. His father, Glover Bozeman, lived at 110 Halleburton Street in Griffin. Born on October 11, 1918, Bozeman only attended school through grammar school. He enlisted in the U.S. Army on January 20, 1941, during the early phases of World War II.

Rising to the rank of Tech Grade -5-, Bozeman was part of the 121st Infantry, 8th Division. He served almost the entire length of the war in Europe. Sadly, he was killed toward the end of the war during fierce fighting in Germany. The young man was listed as Killed in Action on February 28, 1945. He is buried in the American Cemetery in Henri-Chappell, Belguim, A marker remembers him and is found in the Salem Baptist Church Cemetery, Cochran, GA.

His bravery and heroism earned Bozeman the Purple Heart, the Bronze Star and the Combat Infantryman’s Badge. 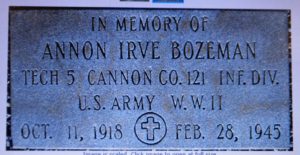