Killed in Aircraft Collision Over England

SSgt. A.B. Butler, Jr. worked in the textile industry. He started his career in Griffin and later moved to North Carolina just before the outbreak of World War II.

In 1928, A.B., Jr. and Mary Gladys Freeman were married by Spalding County Justice of the Peace J.R. Cowan. The 1930 Census shows that the couple lived in Griffin with Daisy’s mother, Alice Freeman. It also shows the couple had two children, Freddie June Butler and James Barry Butler. The census records that the family worked in the Griffin, “cotton mills.”

When World War II began, Butler joined the US Army (Air Corps) and was trained as a gunner and assigned as an air crew member with the 494th Bomber Squadron, 344th Bomber Group, based in England.

News came that Abraham Bradford Butler, Jr. had been killed in action over Italy. This was incorrect. It was later corrected and shown that he was in fact killed in an accident over the skies of England. An account of this accident is as follows:

“…On 8th March 1944 two B-26 Marauder aircraft of the 344th Bomb Group, 494th Bomb Squadron, USAAF, 9th Airforce based at Stanstead, Essex, collided in mid-air over the village of Theydon Mount, Epping, Essex, with the tragic loss of all on-board the two aircraft. The incident was actually the first time any lives had been lost by the 344th, as it was only their 3rd mission since arriving in Britain…”

One of the crew members of the air tragedy was in fact Abraham Bradford Butler, Jr.

A headstone was requested by his wife, Daisy Lee Fine Butler (couple married in 1941) on August 25, 1948. SSgt. Butler is buried in the Mechanicsville (NC) Primitive Baptist Church Cemetery. His wife Daisy would live until 1999. The couple had a son, David Allison Butler, who was born in 1941, and lived in Mecklenburg, NC.

A plaque will be installed in Griffin honoring our Hometown Hero. 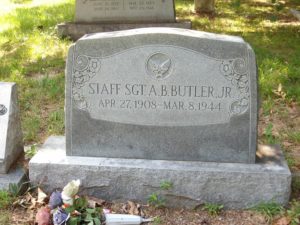