John Helton, usually respectfully called “Big John” behind his back, was a Marine’s Marine. Even the Corps thought so.

John Kenneth Helton was born in Griffin Georgia in 1942 the oldest of three brothers, Richard, Michael and Tommy. The boys grew up on North 8th Street like all the boys in that time and neighborhood did. They went to Northside Grammar School, Spalding Junior High and Griffin High.

As a child, after school John devoted his time to Boy Scout Troop 4 at the First Methodist Church, putting together model airplanes and playing all the usual sports – football, baseball, basketball. As he got older John’s team usually competed in the Griffin Slow Pitch Softball League for the City championship.

John was a fair student but his interests tended to the more practical side. He didn’t finish high school, choosing instead to drop out and go to work for the Georgia Department of Transportation working on the construction of the southern leg of I-285. It was there that he earned his nick name “Big John”, a name he disliked terribly for some reason, for his prowess with a sledgehammer.

But there was a war going on in Vietnam and John wasn’t going to stay at home while other young men like him were fighting for their country.

It was about this time that John met his bride to be Geraldine Pitts at the Palace Street Church of God. “It was love at first sight” and from that day on there was no one else in their lives. They were married December 4, 1965 and on November 5, 1966 had a beautiful baby girl, Tammy Denine.

Before shipping out to Vietnam, John served on the USS Springfield in the Mediterranean. Then it was on to Thua Thien Province, Vietnam with the 2nd Battalion, 4th Marine Regiment, 3rd Marine Division.

Central casting couldn’t find a better example of what a Marine should look like. The Marine Corps agreed. As he finished his tour of duty and before he began his assigned duties as a drill instructor at Parris Island, John was selected as poster person for the Corps but at the last minute he decided to volunteer for another tour in Vietnam instead.

The end of the story is best told in the citation when Sgt. “Big John” Helton was posthumously awarded a Silver Star for Gallantry Under fire.

“Sergeant Helton’s squad was conducting a patrol when it came under attack from a well entrenched and well concealed Viet Cong force of undetermined number… he reacted quickly and had his wounded men moved to a protected area…. he unhesitatingly moved forward along his squad column, encouraging his men and directing their fire. Sgt. Helton repeatedly exposed himself to heavy enemy fire as he raced from position to position directing his men… As he courageously moved through the enemy fire instructing and supervising his squad, he was struck by an enemy bullet. Though seriously wounded, and seemingly driven by a natural possession of coolness and leadership qualities, he instinctively sensed the proper time for aggressive assault upon the enemy. Although there was heavy enemy fire into his position, Sergeant Helton directed his men in a successful assault, driving the enemy into a hasty retreat. By his daring and heroic leadership and selfless devotion to duty, he upheld the highest traditions of the Marine Corps and the U.S. Naval Service.

Sgt. John Helton was killed in action July 6, 1967 at age 24 having served four years in the U.S. Marine corps. 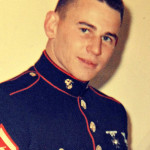