Killed in Action in Belgium in WW2

As a child Paul attended Northside Grammar school before dropping out of school after the 8th grade and ultimately joining the Army in 1939.

Trained as a light machine gunner he served in Company D, 7th Armored Division, 31st Tank Battalion. Paul’s unit landed in France in 1944 and fought their way across Europe and into Germany before he was killed in combat January 21, 1945 near the famous Belgian town of Bastogne.

In a letter to Paul’s parents his commanding officer described the circumstances.

“Private Buckalew died of wounds received in action on 21 January 1945 while we were engaged in a particularly hazardous undertaking in Belgium. During the course of the engagement fierce enemy resistance was encountered and the lives of many of our soldiers were endangered. By his heroic actions on that occasion he contributed materially to the success of our mission and in so doing lost his life.

“Those of us who knew your son always respected him and admired him for his courage and devotion to duty. Your sorrow and ours on his loss is something beyond writing or speech. We can say only this, we are proud to have known him and will always remember him with affection. He died for his country.”

Pvt. Paul E. Buckalew was buried initially in the United States Military Cemetery, Henri-ChapelleBelgium.In October 1947 however he and one of his comrades were the first local men to be returned after the war to be buried on American soil. His body now rests in the National Cemetery, Marietta, Georgia.

Although Buckalew did not come home alive, a community now honors the World War 2, soldier. An individual plaque will be installed in Historic Downtown Griffin honoring Buckalew. The plaque is sponsored by Mr. and Mrs. Ronnie Massey. 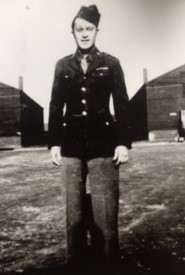