Killed in Action in Italy

Fred E. Cobb was born on August 25, 1923. He was 21 years old when he reported to begin his service on February 20, 1944, at Fort McPherson, Georgia. He was assigned to the 88th Infantry Division and would go to Italy to fight in the height of World War 2.

The Army Private was married to Helen Cook Cobb. His mother, Mrs. W.G. King, who lived at 721 West Taylor Street, received the dreaded telegram about her son being killed in action on October 21, 1944. Private Cobb would serve less than a year before he was killed on the battlefield. He is buried in the Oak Hill Cemetery, Griffin.

Private Cobb may not have returned home alive but a grateful community now honors the him. An individual plaque will be installed in Historic Downtown Griffin. The plaque is proudly sponsored by United Bank. 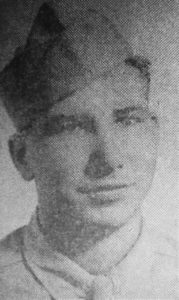