Not much is known about Martin Eppinger or his military service. Research does show that Eppinger was born Christmas Day, December 25, 1932. He was a twin son of Lula Eppinger who lived at 227 W. Oak Street, Griffin.

The African-American soldier enlisted in the U.S. Army on February 7, 1951. He became a Private First Class. He served in the 15th Infantry. 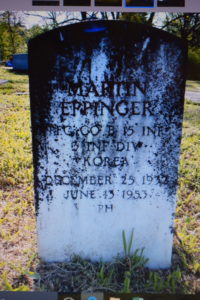