First Listed as a Prisoner of War

U.S. Army Private First Class Harry E. Tate was born on October 28, 1928. He and his wife Evelyn N. Johnson, met while they were students at Spalding High School, when it was located near to where Southern Crescent Technical College now stands. Tate and his wife lived in Experiment.

Tate enlisted in the U.S. Army and was assigned to Company G of the 19th Infantry, 24th Battalion and trained at Ft. Benning.

He headed to Korea to fight. Reports came back to Griffin that he had been taken prisoner of war by the North Korean, Chinese Army. Then it was reported he had been, “liberated.” But later letters written by his wife Evelyn came back marked, “missing,” and then, “deceased.” Despair turned to heartbreak when word came from the Army that PFC Tate had indeed been killed in action on August 19, 1950.

Griffin and Spalding County’s Hometown Hero is buried in the Oak Hill Cemetery. 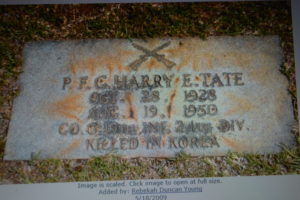