Born May 14, 1923, Charles L. Awtry worked in Griffin’s Dundee Mills. He was single and attended Spalding High School for two years, when it was located near what is today Southern Crescent Technical College.

Awtry enlisted in the U.S. Army at the height of fighting during World War II. He was sworn in at Ft. McPherson on February 23, 1943. Awtry became part of the 2nd Armored Division.

Sadly, Private Awtry was presumed killed and listed as missing in action (MIA) on July 30, 1944, just a little over a year after he had enlisted to serve his country. He helped free France from German and Nazi occupation. 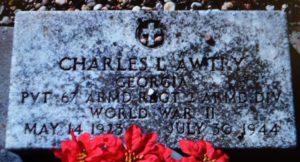