Private First Class, Willis Terrell Akins, was the first man from Spalding County killed in the Korean War. Born on June 7, 1932, Akins was the son of Mr. and Mrs. Willis Akin of Route B, Griffin. He served in the U.S. Army in the famous 24th Infantry Division. This was the unit that was rushed into Korea as tensions mounted in the area. Akins was killed in action on August 9, 1950 in the Naktong Bluge area of Korea. He is buried in the Rehoboth Baptist Church Cemetery, Griffin.

Although Akins did not come home alive, a grateful community now honors the Hometown Hero. An individual plaque will be installed in Historic Downtown Griffin. The plaque is sponsored by an anonymous donor in honor of Tim Furlow. 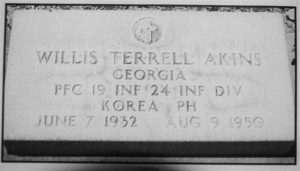 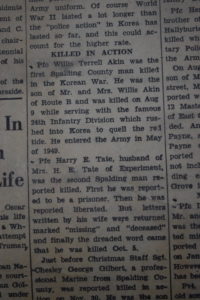