Volunteering was what James Terry Coggins did all his life.

When he was a child, Terry grew up on a farm out High Falls Road. He loved to help his grandmother and grandfather with the never ending farm chores. Terry would volunteer to feed the animals, help plant and harvest the crops, slaughter the hogs and clean stalls, before he and his friends took the time to play a game of baseball. According to his family, “Terry loved the country life.”

When it came time to serve his country, Terry Coggins volunteered once again and joined the United States Army. “I didn’t want him to go (to Vietnam). But like he always did, Terry volunteered,” remembered his mother Emma Rose Coggins. “Terry was a good son. A real good son.”

As the oldest, James Terry Coggins shared a home with three sisters; Patricia Coggins McCord, Lawanda Coggins and the late Phyllis Diane Coggins. An additional four brothers were in the Coggins household including; Joe Henry Coggins, Jr., Gerald Coggins, Thomas Coggins and the late Kenneth Coggins. “It was plenty crowded and times were tough. But you know what? We didn’t know it,” smiled brother Gerald, himself a United States Army veteran.

At times members of the family would live out High Falls Road, past Patrick Park, because it was so crowded in their downtown Quilly Street home. “But we were a loving family,” baby brother Thomas related. Joe, Sr., and wife Emma Rose raised their family in Griffin with a sense of values. “We really didn’t get into trouble,” sister Patricia shared. “Terry and I lived in the country most of the time with Big Mama (Lucille Mosley). It was a great life.”

Sister Lawanda remembers Terry and the family playing in the yard behind their house. “You know play stuff. Playing in the branch. These are good memories.”An aunt, Mary Frances Ham, also had a lot to do with the children’s upbringing. “She helped my mama a lot. She had a little son too and we would all get together and do what needed to be done,” smiled Lawanda.

Terry attended local schools; Annie Shockley for elementary, A.Z. Kelsey for middle school and graduating from Fairmont High School. Some of his favorite teachers were Mr. Boddy, Mrs. Kendall, Mrs. Head, Mrs. Manning and principal Frank Touchstone. One of Terry’s best friends growing up was Terry Mangham. Sister Lawanda relayed a story that while in high school her brother Terry
Coggins and his friend Terry Mangham would only call each other by their last names. “I suppose this was so they would not get confused with which Terry they were talking to,” Lawanda laughed.

Other friends Terry Coggins grew up with included Jessie Ham, Eddie James Smith, James Ed Williams, Baldy Evans, Larry Blackman, Gerald Simpson, Thomas Mosley and the late Clarence Sullivan. According to family members these friends stayed together in school. They were good young men but did not take, “any junk. Terry would stand up for himself for sure,” Lawanda said.

When he graduated from Fairmont, Terry decided to join the Army. Family members and photos showed how good Terry looked in his uniform. He was part of the infantry in the Army. “When Terry would come home, on leave, he would get me to shine his Army boots,” Patricia said. “He paid me $2-3.00 and I could really make those boots shine.”

Terry loved being home with his family. “I remember the last time Terry was home he threw me up in the air and (tickled) me and blew bubbles in my belly,” brother Gerald smiled. “Terry didn’t want to leave and go back, but it was his duty. Our mama told him he had to go back and he did. That was the last time we would see him.”

Terry left for a tour of duty in Vietnam on April 23, 1968. A short two months later, June 28, 1968, James Terry Coggins was killed by enemy fire. He was only 18 years old, a month shy of his 19th birthday. He left behind his family and a son, Johnathan Fitzgerald.

Terry’s mother remembers that dreaded visit from the military. “It was after dark. These men drove up in a military car and were searching the area with their flashlights,” Emma Rose Coggins remembers. “They found our house and told us the terrible news.” The news of the young man’s death.

The military personnel would stay with the family until all arrangements had been made, Terry’s body returned and the funeral held. Terry is buried in the Coggins family plot in Griffin’s Oak Hill Cemetery.

Mother Emma Rose has a special suitcase she keeps under her bed. It is filled with her oldest son’s letters home, photos, medals, telegrams and yellowed newspapers. “These are special to me,” she smiled. “I could never throw them away.”

The family has begun to all get together as often as possible to remember their son and brother, Terry. According to family members this is valuable time to visit and remember. “You know, I think we all grew up better (people),” remembers baby brother Thomas.

Volunteer. The dictionary describes a volunteer as someone who performs a service willingly.

James Terry Coggins simply knew nothing else. He gave of himself willingly. He volunteered in all that he did in his short life.

For you see, James Terry Coggins was just that type of person. 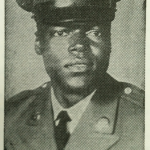