Sixth-Nine Years Later, A Soldier
Returns to Say Thank you to His Fallen Comrade

Howard Baugh lived his life in strict accordance with his religious beliefs. When America entered WWII he was torn by the biblical admonition “Thou shalt not kill.” As the war progressed and it became clear he would be drafted if he did not volunteer he discussed with his family whether he should join as a “conscientious objector”. In the end however, despite his personal misgivings Howard saw the necessity of serving in order to defend his country. Baugh didn’t want anyone, especially his friends already serving, to ever think he was a coward. He volunteered to serve in whatever capacity he was needed.

In spite of his reluctance Howard Baugh proved to be an extraordinarily courageous warrior which could be attested to by several fellow servicemen who survived the war thanks to his bravery in combat.

Born September 5, 1925 at the family home on Cascade Avenue, Griffin to Seborn and Ruth Pitts Baugh Howard’s siblings numbered nine brothers and one sister. During the war four of those brothers served overseas.

As a child Howard attended East Griffin School but times were tough and money was tight so like most of his family he had to leave school before completing high school in order to help support the family. He went to work on the night shift at Dundee Mill #3 to help to help out.

Howard is always described as a kind, gentle young man. He particularly doted on his younger brothers and sister. He was the one who would comfort his little sister Rilla if she had a bad dream and he would often wake up his little brother Roland when he came home late from work and give him a small candy treat. As a result,Howard was always special to them.

Once in the service Howard appears to have adapted well to military life – considering the circumstances. When he came come from training all the clan gathered to wish him well before he shipped out overseas. As he left his father and brothers wanted to walk with him to the bus station but Howard said “no, he wanted to remember us all together there on the front porch”.

Howard served overseas for nine months as a private in I-TEM Company, 114 Infantry Regiment, 44th Infantry Division as they fought their way across France and into Germany.

In March 1945 it became obvious that the combined Allied forces were overwhelming the German army’s ability to resist and the fighting in Europe would soon be over.

Although the German army was in a state of collapse as American forces crossed into the German homeland there was a resurgence of fanatical resistance as their soldiers fought to defend their native soil and as a result Baugh’s platoon, while in advancing across open ground ahead of their front line, was caught in a vicious ambush near Dossemheim Germany.

Pinned down, overwhelmingly outnumbered, exposed and caught in a withering crossfire of machine guns and a 20-millimeter flak guns – even returning fire was suicidal. The GIs situation was hopeless. With the Germans poised for the kill platoon leader Sargent Harold Sudhoff shouted to his men to take cover and stay down until support from the rear could reach them. He didn’t have to repeat himself as every man hugged the ground and prayed for help to arrive soon.

Except one. PFC Howard Baugh, seeing his comrades being wounded and killed left and right, took it upon himself to defy his platoon leader.

Armed with a Browning Automatic Rifle and exposing himself to heavy enemy fire, Baugh held his ground against the advancing Germans, took cover standing up behind a tree and opened fire. – effectively stalling the enemy attack long enough for help to arrive in the form of tank and mortar support

But it couldn’t last forever. Baugh held his own against the increasing spray of small arms fire until a flak gun zeroed in and took down Baugh and the tree he was sheltering behind with a 20-millimeter round of ammunition.

Nevertheless Howard Baugh had accomplished his mission – by holding the enemy at bay as long as he did, he gave tank and mortar support time to come forward, engage the enemy and rescue his brothers in arms – he had saved the lives of many of his comrades.

For his actions that day PFC Howard Baugh was awarded the Bronze Star with the Combat V for Valor for “heroic achievement in combat.”

In late 2014 one of the men who fought alongside Howard Baugh that fateful day visited Griffin to pay his respects at the grave of Howard Baugh. A little over a month later that comrade himself passed away but he too had accomplished his mission before he died – he honored the memory of the young 19-year-old Georgia boy who had saved his life sixty-nine years before.

Baugh’s body was returned to his hometown Griffin. Services were held at the Holiness Church in East Griffin. PFC Baugh is buried in the Mt. Gilead Cemetery. Although Baugh did not come home alive, a community now honors the World War 2, soldier. The Veterans Military Affairs and Honor our KIA committees will install an individual plaque to honor Baugh in Historic Downtown Griffin. The plaque is sponsored by an anonymous donor in memory of the Army Private and honor of the Baugh family. 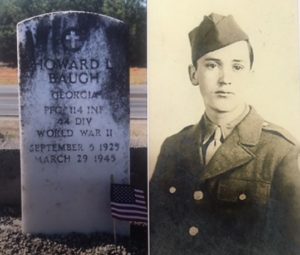 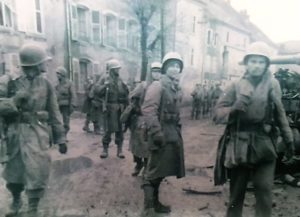