Army Private First Class Charles Wayne Hall was born on February 22, 1948. Hall would begin his tour of duty in Vietnam on September 26, 1968. The mortality rate for soldiers in the field, especially ammunition helpers, was high. Sadly, Charles Wayne Hall was killed in action on November 7, 1968. The young draftee had served his country in Vietnam for less than two months before he was killed.PFC Hallwould be killed in action in Binh Dinh, South Vietnam. He was barely 20 years old.

Charles Wayne Hall, is buried in the Griffin Memorial Gardens. He is also listed on the Vietnam Wall Monument in Washington, D.C.

Although Hall did not come home alive, a community now honors the Vietnam War soldier. An individual plaque will be installed in Historic Downtown Griffin to honor our Hometown Hero. The plaque is sponsored by Pat and United Bank. 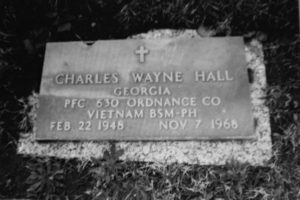