Name on WWII Monument but Fact is, “I’m Not Dead!”

In one of the oddest, but certainly understandable, situations, one of the soldiers listed as dead on the World War II monument standing in Veteran Park, did not die in WWII.

Calvin Leon Briscoe was born on October 24, 1924. His father was William Briscoe and his mother Susan Clark Briscoe. The young man enlisted in the US Army in May, 1941.

PFC Briscoe was with the 87th Signal Corps during the war. He headed overseas after his initial 13 weeks of training and stayed there until honorably discharged.

In an article published in the Griffin Daily News, June 23, 1976, Briscoe said it gave him an “eery feeling,” to have his name on the monument honoring the World War II dead. Apparently, his unit became separated from a main unit during heavy fighting. “The only thing I can figure is that after heavy combat, our company had just left Bastogne (during the Battle of the Bulge) and we became separated from the main unit,” Briscoe reported in the article.

He continued, “We couldn’t get back to them for about 17 days and most of the men I served with were killed. When we finally got back they all scattered and I don’t know what happened to them.”

Briscoe was Honorably Discharged from the US Army on August 19, 1945.

Briscoe said that he really did not like to recall any of those days, but he was a good sport when friends kidded him about being listed on the monument. Briscoe’s work as a house painter took him from town to town.

PFC Calvin Leon Briscoe actually died on November 26, 1998. He is buried in the Sandy Creek Cemetery in Flovilla. A mix up indeed, but still a hero. 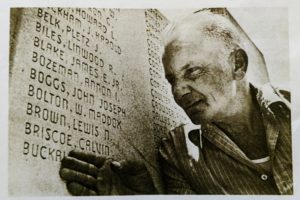