Killed in Action in France in WWI

Daniel Grier Norton was a go getter. His skills got him promoted to the rank of Corporal in the U.S. Army. Born in Marietta in 1891, Norton’s hometown when he enlisted was Griffin. Training at Fort McPherson, Norton would soon be sent overseas to France to fight in the trenches in World War 1.
On September 26, 1918, four short months after he reported for action, Cpl. Norton would be killed. Corporal Daniel Grier Norton is buried in the American Cemetery in Meuse-Argonne, France.

His father and mother, Solomon Claud Norton and Malissa Harris Norton, who lived along Route C, Griffin, were notified of their son’s death.

Although Corporal Norton did not come home alive, a community now honors the World War I hero. An individual plaque honoring Daniel Grier Norton will be installed in Griffin’s Historic District sponsored by Dick Morrow Enterprises. 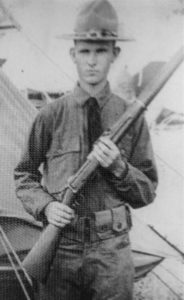 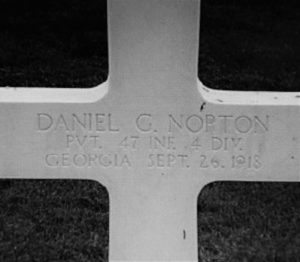