Not a native of Griffin, Albert Parham nevertheless found himself a resident of this city when America entered WWI and joined up here to go overseas to do his part.

Born the son of Alonza and Mary Parham, Albert was raised in Gainesville, Georgia. He had a brother Erwin four years older and a sister Lida three years younger.

Parham moved to Griffin to work as an executive at the Georgia Cotton Mill. It’s not known if he was married.

He enlisted May 1, 1917 and received his training at Camp Gordon near Atlanta. He was ultimately attached to Company E, 308th Regiment, First Battalion, 77th Division and shipped out for France August 21St 1918.

Before shipping out, Parham, together with 1744 other men on this day, was commissioned a 2nd Lieutenant on June 3rd, 1918.

Although only in the fighting in France for approximately six weeks before his death, Lt. Parham participated in one of the most famous incidents of the war. The experience of the famous “Lost Battalion.”

In late spring 1918 the German army launched what they understood was their last chance to win the war before the full weight of the Americans could be brought to bear on the Western Front. It failed and soon the Germans were facing relentless pressure by the Americans in the area of France known as the Argonne Forest.

The 77th Division’s commanding officers pushed hard but the Germans still fought back tenaciously in many places. Soon word came down the chain of command that the 307th and 308th were not sufficiently “aggressive” and their commanding officers would be sacked unless their objectives were achieved “without regard to casualties”.

The commander of the First Battalion, 308th Regiment Major Charles Whittlesey protested but it was to no avail. The attack went forward the morning of October 2nd.

Overall the attack failed all along the line with heavy losses, however Whittlesey spied a gap in the German lines and, seizing the initiative, redirected his troops there. Initially they made good progress up a small valley. But the 308th was relying on the adjoining French troops to cover their left flank.

Unfortunately the French failed to advance from their starting positions leaving Whittlesey and his men isolated far in advance of the allies front line.

By the next morning the Germans had slammed the door on the trap. The 308th was surrounded.

All they could do was dig in, wait for help. and hope their supplies of food , water and ammunition held out.

Frantic efforts to relieve the “Lost Battalion” accomplished nothing on the 4th, 5th or 6th. The situation deteriorated dramatically for the “doughboys” as the Germans became as fixated on destroying the surrounded troops as the Americans were on saving them.

By the 6th, essentially out of food, water, ammunition and with no medical care for their wounded, junior officers of the 308th signed a petition to Major Whittlesey saying in light of the situation it is “not a dishonorable deed to give up”.

Whittlesey’s response was to give orders that any man who attempted to surrender would be shot.

On the 7th, the condition of the men, wounded or not, was appalling and the battalion bordered on collapse when an offer was received from the Germans for the surviving men of the 308th to surrender “as it is quite useless to continue to fight”.

Whittlesey interpreted this correctly, the Germans were giving up the fight and tried this last trick to lure them into surrendering. He ignored their offer.

Relief reached the Lost Battalion at seven o’clock that night.

At the end 194 American soldiers could still walk out even though many were wounded, 144 had to be taken out on stretchers and the rest of the original 554, one of whom was Lt. Albert Parham, were dead.

After the war Whittlesey, though treated as a hero by the public, was haunted by what he thought might have been the unnecessary deaths of his men caused by his stubborn refusal to surrender. He committed suicide by jumping overboard from an ocean liner. 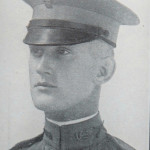