“A jolly fellow. Always joking around. Always fun to be with.”

That’s how his cousin Jack Barfield remembers Noah Barfield now, some seventy years later. A pretty dam nice way to be thought of after all these years.

His father was Lloyd Barfield and his mother was Kate C. Barfield. The family grew to three girls and two boys. Noah was the middle child, six years younger than brother Raymond and three years older than sister Birdie.

Noah’s formal education was complete when he graduated from Griffin High School.

Though Noah wasn’t very tall and he was always very slender his whole life, he was an excellent athlete on the football and basketball teams. And he easily excelled at any other sport he tried while a student at Griffin High during the mid 1930’s.

Noah was very popular. His “jolly” nature made him universally liked among his peers and his exceptional good looks apparently didn’t hurt his chances with the young ladies. His nickname was “Freckles”.

Right out of high school he went to work at Dundee Mills #1. But he was much more interested in serving in local National Guard Unit the Spalding Grays. He would work his shift at the mill and then go straight to the armory for more training.

As the war in Europe expanded America, took its first tentative steps to “be prepared” should we be drawn into the fighting over there. National Guard units were “called up”. The Spalding Grays were tapped for active duty September 16, 1940.

Noah Barfield, serial number 20400097, entered the service as a private in the infantry but his leadership qualities must have been obvious as he was soon promoted to corporeal then sergeant and ultimately was encouraged by his superiors to go to officer training school. Noah, however, wasn’t interested. He said he “didn’t want to boss his friends around “. At the time of his death he was serving as a First Sergeant in the Headquarters Company, 30th Infantry Division.

Noah had a “steady girlfriend” in Griffin. But during training while stationed in Indiana he found his “one and only”. She was vivacious Aifria Dixon from Indianapolis. Parents were alerted and serious plans were being discussed. Aifria kept in regular communication with Mrs. Barfield sharing news from Noah until his death. Nothing more is known of where her life lead Aifria after the war.

Years of training in the states and in England followed in preparation for the invasion of France.

Noah was not in the initial landings at Normandy. His division landed four days later but he nevertheless saw plenty of combat as the 30th fought its way across France and Holland in some of the most important battles he of the war. He was lucky and was never wounded.

He and his mother were truly prolific letter writers. Her letters to him were lost in the war but the family still has well over one hundred of Noah’s letters home. In January 1945 alone there are eleven and in the week before his death he mailed four letters postmarked on the 8th, 10th 11th and his last letter home on the 13th.

In all those letters he seemingly never once mentioned the fighting or the terrible things going on around him. Everything was always “fine”.

German resistance became more stubborn as the Allies entered their homeland and particularly each river crossing became a major engagement.

At the the Ruhr River close by to lnden, Germany on February 8th the enemy blew river locks upstream and the consequent flood rendered the river uncrossable till the water receded. Thus delaying a major assault planned for the 11th.

Waiting for the attack to be rescheduled Barfield and his men sought temporary shelter in a large and solidly built factory building very near the river.

On the night of the 14th they came under an aerial attack by five German planes (this and two other bombing raids here this week by the Germans were the first time in history that jet planes were used in combat in squadrons). The attack, understandably, sent the Americans helter skelter to the basement.

Unfortunately, once there Noah remembered documents left upstairs that he considered so important that he needed to retrieve them. Telling his men he would “be right back” he dashed upstairs. A few moments later a German bomb made a direct hit on the building. The top floors disintegrated.

All the men in the basement survived but no remains of Sgt. Noah Barfield were ever found, not even his dog tags.

The citation awarding Noah a Bronze Star read in part: “During periods when his unit was bombed by the enemy, he continuously checked on the welfare of his men instead of seeking shelter for himself”.

In his last letter he told his Mother “I had 3 letters from you yesterday and 3 today and a valentine too” (letters mailed in the states on successive days were routinely delivered in batches to the front lines). “It was very nice, I liked it.” he added.

Further in the same letter he wrote of seeing a old friend Jimmie Pelt from Spalding County and said to tell Pelt’s mother she needn’t worry : “He is in the rear and there isn’t much danger of him getting hurt unless he trips over something in the dark. That goes for me too.”

That letter was dated February 11th, postmarked the 13th and 1st Sergeant Noah Barfield was killed in action on the 14th.

After the war Mrs. Barfield wrote the 30th Division’s Chaplain. He replied:

“I personally conducted his memorial service for your son 15 March 1945 with many of the men and officers who knew him so well present. Sgt. Barfield was one of the finest men I have ever known. Enlisted men and officers alike held him in the same high esteem. He was an example of a fine Christian soldier to all who knew him. To know that your son gave his life in the service of our country will make our freedom more precious to all of us.

First Sergeant Noah Barfield’s name is engraved on a monument in the American War Cemetery near Margraten, Netherlands honoring American servicemen who died in WWII whose bodies were never recovered.

Cousin Jack Barfield, who lost Noah and two other first cousins KIA in the war, remembers the day that Noah and many other young men from Spalding County boarded a bus as they headed off to Fort Jackson South Carolina to begin their active duty.

Noah’s mother, and other local ladies, had small 2’X3′ flags that day they used to wave goodbye. Those flags were then hung over their fireplaces as a constant reminder of their sons who were away at war. Mrs. Barfield’s banner hung there in her home for many years even after the war was over and remains to this day a treasured family artifact.

In proud remembrance of him local Veterans of Foreign Wars Post Number 5448 is named in honor of 1st Sergeant Noah Barfield. 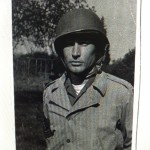