One would understand that after 18 operations, countless sleepless nights, 40 years with an artificial leg, a person would be bitter. Very bitter. But not Tommy Lee. “I have no remorse at all. I would go back to fight for my country today.”

Tommy Lee is a remarkable individual. He lost his leg in the Vietnam War. There are scars and wounds all over his body he has had to care for since that disastrous fall day in 1969. But Tommy Lee kept on going. He is not bitter, but has made his life and those around him better each and every day.

Tommy Lee has been selected as the 2016 Honorary Chair of the Honor our KIA committee. Judge Rita Cavanaugh nominated Lee for the honor. “I have known Tommy and his family for years, “ Judge Cavanaugh said during the nomination. “He is a good-good gentleman.”

Many in Griffin and Spalding County will remember Tommy and his wife Pat as the local Bar-B-Que king and queen years ago. They couple catered for groups as small as 50 to as large as 1,000. “I kinda took over his (Ed Griffin) operation when he retired,” Tommy smiled. “Pat and I had a dream to open a Bar-B-Que restaurant but we got so busy catering that is what we did.” He learned various secret sauces and cooking techniques so customers and groups could enjoy the “best Bar-B-Que anywhere around,” Tommy grinned. “Bar-B-Que is a powerful thing in the south,” Lee laughed. “You really don’t need a lot of sauce if you cook it right.”

A Life in the Country

Growing up in Metter, Ga., Tommy was use to country life. “My family were farmers. We eventually moved into town (Metter) and became house painters.” But the country was where Tommy wanted to live. “I worked in Doraville and really got tired of that rat race,” Lee said. “We learned of a place out Birdie Road that was for sale. Pat and I looked over it and loved it.” This would become home to the Lee family in 1973, which includes a daughter, a son (who works with Fayette County law enforcement) and numerous dogs and cats. Bandit, their little dog, invites you into the home. Bandit never met a stranger.

Since moving to Spalding County Tommy Lee, wife Pat, and their family have been involved in numerous projects helping others. They have been active members the County Line United Methodist Church, been scoutmaster for Troop 84, worked as camp director and other needed positions at Boy Scout Camp Thunder during the summers. “This has always been a happy-family place,” Pat remembers.

Point Man in the Bush

When Tommy graduated from high school in 1968, one of the first “congratulations,” letters he received was from the Metter Selective Service Administration, also known of as, The Draft Board. “I was drafted and given orders to report to Atlanta to Ponce de Leon Avenue for my physical.” By December Lee was ordered to report to Fort Benning for training. “It was so cold…oh so cold at Benning,” Tommy remembers. “We were so cold that we stacked the unused mattresses around us to keep warm. Even the shower only had cold water.”

Several months later with infantry training behind him, Lee reported to Fort Lewis, Washington (state). Then it was on to Vietnam. “When we landed, the captain of the plane told us Mario Andretti had just won the 1969 Indianapolis 500 race. When the door of the plane opened it was the worst stench I had ever smelled,” Lee recalled. Open sewage, untreated water, was all part of the countryside in Vietnam.

Lee and the other members of his Big Red 1, division were then trained for six days. “We had bunker duty with no weapons,” Lee said. “When our troops were finally given weapons we were told that any sound beyond the wire of the compound was trouble.” Lee shared, “We were on duty one night and we heard a sound. We fired into darkness not knowing what it was, (enemy or other). The next morning we found out we had killed a water buffalo that had wandered into the danger area.”

Lee became the point man of his patrol. This meant he was the first person leading the group when the patrol went out into the bush. The group of seven soldiers would usually go out for five days to a week on patrol. Weighing 150, pounds, “soaking wet,” Lee also carried 70-80 pounds of ammo, food and sleeping mat on his back. “Not only did I have 200-250 rounds of ammo for my M-16, I also had 30-35 rounds of high explosives to carry. It was heavy, real heavy.” Lee shared.

On Sunday, September 28, 1969, Army PFC Lee and his team were on patrol. Tommy was training a new man sharing the expectations and dangers of being the point man. “We came to a junction in this thick bush,” Lee said. “It was getting dark. (The trainee) stepped one way. The trail was booby trapped with wire tied to an explosive. That explosion put me flat on my back. I really didn’t know what happened,” Lee recalled. The helicopters were called in to help rescue the patrol. Known of as a “Jungle-Buster” the helicopter could not land but had to hover above the rubber trees to aid in the rescue. “I looked over and knew the (trainee) man was dead,” Lee said. “(He) was wrapped up in a poncho.” Lee said he did not really feel any pain until he got into the helicopter and it began to vibrate.

Landing in a field hospital, he was immediately ordered to be taken into triage unit by a major. “I do remember telling that major that he could take his triage and ————-,” Lee laughed. “The major said anyone who could cuss like that was going to live.”

Time became a fog with numerous operations, the mending of a broken body, and the rehabilitation of Tommy Lee. “I really don’t remember the time. But I do know I was taken to a hospital in Saigon and then onto Japan.”

After infinite operations, Lee was taken to the VA Hospital in Atlanta. Destiny began to smile once again on Tommy Lee. “That is where I met my wife Pat,” Tommy smiled. “It was my lucky day.” Wife Pat also remembers the meeting like it was yesterday. “I worked with AT&T in Atlanta and had volunteered to work at the VA (in Atlanta). It was a Tuesday night and some of my friends suggested I go meet this handsome young man (Tommy) in another room. I did and the next thing you know we are going out for burgers and fries.” After several “dates” Tommy asked Pat to marry him. “I simply loved him from the start. His looks. His personality. Tommy is a sweet-sweet man,” Pat shared. And Pat has been there every step of the way ever since.

Pat even shared a story about her husband Tommy. “Oh no, he’s not a grouchy bear. One night when we were driving Tommy saw a rabbit in the road. He stopped and took the rabbit in his arms. He then went door to door and found a little girl to whom the rabbit belonged.” But Pat quickly added, “(Tommy) is so cute. He is a great person. Now I don’t want to give away too much, (because he has a reputation to protect),” Pat grinned.

Once a hero….always a hero

As the 2016 Honorary Chair of the Honor our KIA committee, Tommy Lee adds to the long list of heroes within the Griffin-Spalding County Community. “It is truly an honor for Tommy Lee to be with us in 2016,” Quimby Melton, chair of the Honor our KIA committee said. “He is indeed a genuine hometown hero. He is all this committee represents, honor, dignity and commitment,” Melton added. Last year (2015) another hometown hero, Tim Furlow, was honorary chair of the group.

When he was asked about being a hero, Tommy Lee quickly choked up, “Oh no, I’m not the hero. (Through the Grace of God) my name is not on that wall (the Vietnam Wall in Washington). But the guy who hit that wire…..his name is on there.” Tommy said he has both seen the permanent Washington, D.C. Vietnam Wall and the travelling “Wall” when it came through Griffin. “Those are the real heroes. The names on that wall. It breaks me down every time I think of it.”

History reveals to us that not everyone supported the Vietnam War. It was an unpopular war run by politicians. It was a terrible time for our nation. But there were those who fought to protect our freedoms, fought without questioning the politics, forever living with the suffering this unpopular war brought unto them.

But regrets. Tommy Lee has none of that. He’s just that type person. “I would go back and fight for my country today. You just don’t change what you believe or (what you) believe in,” Tommy Lee concluded.

Thank you Tommy Lee and all the veterans of Griffin and Spalding County for giving your all. 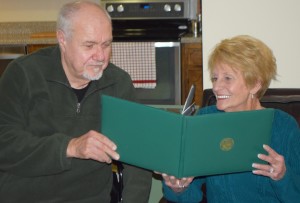 Tommy Lee has been named the 2016 Honorary Chair of Honor our KIA. Tommy, and his wife Pat, look over his US Army retirement certificate.