The Honor Our Killed in Action Committee will designate a local surviving veteran each year as honorary chairman.

The veteran will be someone who by his example has been an inspiration to the community. Tim Furlow will serve this year as the first honorary chairman, the committee announced.

Furlow is well-known in Griffin and Spalding County as a successful business and family man active in numerous civic organizations, good works and other activities. What might not be so well-known is the extent of the wounds he suffered in combat in Vietnam and the lifelong implications of those injuries for Furlow and his family.

Born in Americus in 1946, Furlow grew up there and attended local schools before moving on to study accounting at the University of Georgia in Athens. Upon graduation, with a bachelor of business administration degree, he was commissioned in June 1968 as an Army second lieutenant. His first duty assignment was Augsburg, Germany, for 18 months, where he was joined by his bride, Peggy Blakely of Griffin.

His next assignment took him to Hoi An Province, Vietnam, as an infantry captain in command of a 60-man unit of American and South Vietnamese troops responsible for fire support during the fighting there against the Viet Cong. After two months in country and several engagements with the enemy, on July 28, 1970, while on patrol, a remote-controlled booby trap was exploded near Furlow, severely wounding him, another American and several South Vietnamese soldiers.

The blast took off part of Furlow’s left foot and tissue from his legs, as well as breaking both his legs and one knee and causing damage to his buttocks and right forearm. To make matters worse, his open wounds were infected with a life-threatening bacteria.

Furlow was initially evacuated to a medevac unit in Da Nang, then moved to Camp Zama in Japan, where he was hospitalized until finally transferred to Martin Army Hospital at Fort Benning, where he could thankfully be near his wife and family.

When wounded, he weighed 225 pounds. On arrival at Fort Benning, Furlow weighed 140 pounds and faced many years of rehabilitation, hospitalizations and surgeries (31 at last count.) Yet, through it all, he maintained his upbeat demeanor and well-known sense of humor.

After discharge from the military, Furlow moved to Griffin with his young family and after a stint in banking, established himself as a successful agent specializing in life, disability and hospitalization insurance and annuities. Tim and Peggy Furlow have two children, Meg and Mack and four grandchildren.

Furlow’s example of dogged endurance in the face of his wounds is a credit to him and to all veterans who in times of war risked their lives to defend us individually and this country. The committee believes “it is highly appropriate that Tim Furlow be recognized and honored for his service and sacrifice.”

Honor Our KIA is a local committee formed for the purpose of honoring service men and women killed in action during our country’s wars from World War I to the present. 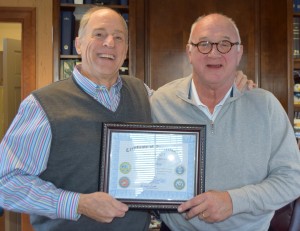 Tim Furlow (right) receives a Certificate of Appreciation by Quimby Melton, for his service as 2015 Honorary Chair of Honor our KIA. In making the presentation, Melton said, “We could not have accomplished what we have without Tim’s dynamic leadership. Tim is an outstanding example to all of us in Griffin and Spalding County of what true dedication, patriotism and a hometown hero is all about.”